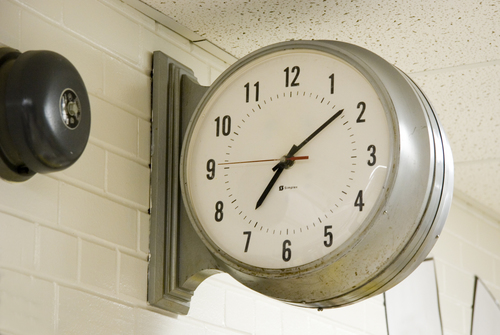 School is a very different place now then it was just over a year ago. Many new policies have been implemented to keep students as safe and healthy as possible, all while allowing them the opportunity to learn in-person. For the first quarter of the 2020-21 school year, I chose to learn in-person, and overall, the experience went smoothly. During that time though, I noticed one thing that threw off myself and fellow students: the new bell schedule.

According to BHS Principal Mr. Jantz, “the multiple bells were designed to reduce the density of students in the hallway at passing.” But there are so many bells, and they all sounded exactly the same, that it can get difficult to keep track of which bell is which, leading kids to leave class at the wrong times.

Each bell rings approximately one minute after the other, but each grade has a different amount of time to get to class. Freshmen have the most time (about five minutes), and Seniors have the least time (a mere two minutes). A big issue here is that seniors have very little time to get to class, and because of that, they end up disregarding the rules and leaving during the other bells. One BHS student explained that she ends up leaving during the earlier bells because she doesn’t want to be marked late for class. Unless you run, it’s pretty difficult to get from one end of the building to another in two minutes.

Some people also simply forget how many bells have rung, due to their similar sound, so seniors end up leaving class during the junior bell rather than their own. This was an issue I commonly ran into; I forgot what bell we were on, so I kept leaving classes early by mistake.

I believe there’s a pretty simple solution to this problem, though: simply have each bell make a different sound, so that each grade can distinguish their dismissal time and make the hallways more evenly spread out.

There are some issues with implementing an idea like that so suddenly though. Jantz explained that “any future changes will be dictated by the state COVID guidance.” So, if any drastic changes were to be implemented, they would have to be recommended by the state. However, simply changing the sounds of the bells isn’t overly complicated, and could improve the day-to-day life of the students and keep things from becoming chaotic. But if the bells cannot be changed, seniors should at least be given a little leeway about being late, since they only have two minutes to get to class. Perhaps a minute grace period – in other words, if seniors arrive to class a minute late, they won’t be marked so strongly for it.

It’s pretty safe to say that this whole situation is far from the ideal schooling experience. However, it’s important to adapt and adjust your routine to an ever-changing world. The bell schedule currently in place is good, but a few minor changes within state guidelines can make the adjustment much easier on students. No one wants to be in this situation, but if we’re stuck like this for a while, might as well adjust and work with it the best that we can.