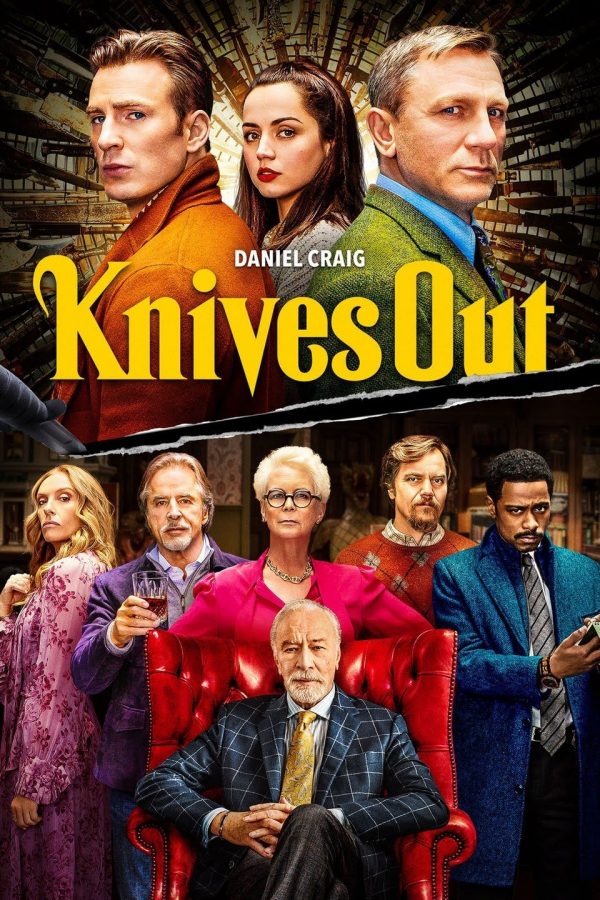 The “whodunit” mystery is a genre of film that, despite its classic status, hasn’t been widespread in mainstream media for some time. That is, until 2019’s Knives Out was released, which throws the genre into a whole new light.

The film covers the mysterious death of renowned crime novelist Harlan Thromberry, as eccentric private detective Benoit Blanc combs through the web of lies surrounding the Thromberry family to find out the truth of Harlan’s murder.

The film itself is a deconstruction, not only of the whodunit genre, but of the political climate of the year it was released. One particular scene comes to mind, where many of the family members argue over immigration policy in the United States, where each member sides with the extremes of both arguments. The conversation is relevant because of the film’s protagonist, Marta, who immigrated to America with her mother and sister. Other characters serve as caricatures of our time, particularly two characters: the grandson of the family, who’s an alt-right internet troll, and the granddaughter, who’s described by one of the characters as having an “SJW degree.” The modern references sometimes come off awkward or shoved into the plot, but the story that unfolds would not work in any other political climate than 2019.

Without delving into spoilers, each character embodies the perception that each side of the political spectrum has of the other, and the film does a good job of dissecting the flaws both sides have. The Thormberrys, despite their facade of kindness, are incredibly superficial, and only care about characters like Harlan and Marta when it benefits them. Even if it does sometimes take you out of the movie when current events or arguments are referenced, the movie does a good job tying it into the narrative.

As for the whodunit genre itself, the way director Rian Johnson handles it creates a whole new take on how the murder mystery is developed. Who murdered Harlan is not the real plot here, it’s how the murder gets away with it. It’s a great way of revitalizing the genre for a more modern audience, especially one that often calls the bluff of films and reveals twists before the credits roll. Knives Out keeps the viewer guessing and on the edge of their seat, and even if you do predict the outcome, how the characters get there is exciting and entertaining.

Other details worth noting are the set and props. The movie mostly takes place on a large estate, lavishly decorated to look like it was pulled straight out of an Agatha Christie novel. Not to mention the iconic circle of knives that’s featured as the prominent set piece. It serves as not only a cool looking background, but becomes crucial to the plot by the end of the movie.

If this seems like a movie you’d want to check out, I highly recommend it. The star-studded cast and complex plot makes Knives Out a great dissection of film genres and our political climate. Even without all of that, it’s simply a fun movie with love and passion seeping through each shot.