A Walk in the Park with Tony: Gun Safety Clubs in Schools? 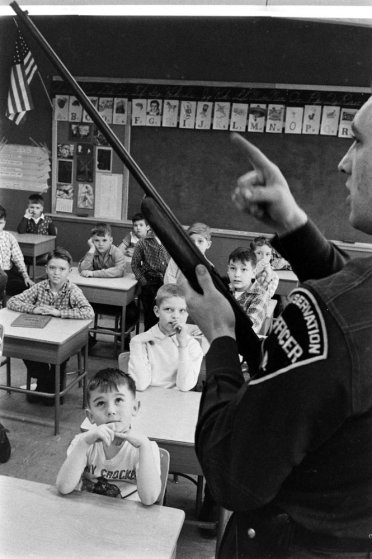 What’s the deal with gun clubs in American High Schools? We often generalize students with guns as school shooters. However, many schools had gun clubs in the 1950s, but these clubs were almost all phased out by the 1970s. Bet you didn’t know that!

In fact, I bet the people reading this article didn’t even know about the gun club in BETHPAGE HIGH SCHOOL, with a gun range that is now an equipment room in the basement. Yes, you just had a stroke. Why did they phase this out? Will this ever be brought back?

The rates of school shootings per year have been unpredictable. The first recorded school shooting dates back in 1840, when a student shot a professor at the University of Virginia. However, in the past, officers would go into elementary schools brandishing firearms to teach kids the safety and functionality of these tools. A popular example in a 1956 copy of LIFE magazine included photographs of Officer Rod Rankin giving a safety lesson to students with a real revolver and rifles.

Even in New York, virtually every high school had a shooting club, in practice till 1969. Some reports of these shooting programs or gun clubs back in the 1940s had students bring their own rifles on subways and on school premises.

Mr. Portuese, a forensics teacher and veritable gun historian, said “Schools had shooting teams until at least 1970, when most schools banned them. The lead in the bullets would vaporize and spread throughout the school.  So, it was a lead poisoning issue, not a gun safety issue.”

Now, how would some students feel about gun clubs or shooting programs today? A former Bethpage High School student–well known pacifist and anti-gun advocate–Mike Melendez said, “It would absolutely be a tremendously idiotic idea to have any guns near students.” Even though he moved away in his freshman year, I can assure you the man wouldn’t even slap an ant if it crawled across the floor.

However there’s a large amount of Pro-Gun supporters that you can find in Bethpage High School. One obvious choice is one of the seniors, captain of Marine Fitness, general chad, Pro-Gun supporter and a future military personel, Aidan Radcliffe, who said: “a gun safety class in school… would be a very important addition to our safety and I would think it’s a very interesting way to approach gun rights. I do believe it should be an optional thing, not everyone should be able to do it and have to pass tests to do it.”

Now reiterating on a previous topic of Safety Classes, if an officer of the law or maybe a veteran could spend the time providing safety lessons on firearms, this might prove beneficial to students and would be widely accepted as a better alternative to any gun sporting teams. Seeing as many schools around the country can afford spending a few assemblies every year, if schools can schedule one per year. With a police officer there would be an atmosphere or respect and the general public would accept it more because a man or woman trained to handle a firearm throughout their career would be in charge of the lesson. Discussing further the tax dollars for this program is difficult, but I don’t believe this should be mandatory. An offer each school provides to their local police department and if an officer can spend any off duty time as a volunteer.

However this topic should be considered as with safety classes or gun clubs would be very beneficial to children. Not only the topic of school shootings in the news, but the amount of news reports of children dying from police officer with them holding firearms, fake or not. When an uninformed child holds a weapon or a fake in public, it’s generally because they find its cool or for shock value. Minors, as young as in middle school, have been killed by police officers because of brandishing fake weapons such as Tamir Rice in 2014. Tamir Rice was only 12 years old before he was shot fatally because he was pointing a toy gun at pedestrians. If we reinstate safety classes, children would be more aware and respectful to firearms treating them as cautiously as possible.

With all of this said, ultimately a change like reintroducing gun clubs or safety classes in most schools wouldn’t even be considered in the atmosphere of the political arguments of guns. As a society, we only have the opposite ends of the radical political spectrum as one side will constantly fight to gain as many gun restrictions while the other will fight for the rights of the people, for everyone to own any kind of firearm. Especially in the State of New York, there is little to no chance any kids would have firearms in schools. However, I believe that these programs would give more benefits to society than negatives.