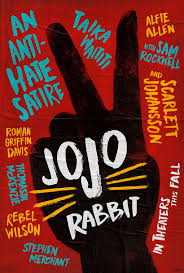 At first glance, Takia Watiti’s “Jojo Rabbit” is a humorous piece of satire about a young child living in Nazi Germany. In most cases, nazi movies are either serious dramas or war movies. However, Jojo Rabbit has an unexpected element never seen before: The child’s imaginary friend is the infamous dictator Adolf Hitler, seen through the eyes of a ten-year-old. After it won the Toronto International Film Festival People’s Choice Award and its initial reviews rolled in, I became hooked.

Jojo Rabbit tells the story of Jojo, a ten-year-old living in Nazi Germany towards the end of the Second World War. Jojo is a devout member of the Nazi party, going as far as wearing their uniform, spreading their propaganda and arguing over politics with his mother at the dinner table. However, this all changes when Jojo meets Elsa, a Jewish girl Jojo’s mother is hiding from the Gestapo in their house.

Since the movie first hit the media, I have closely followed it and anticipated it’s release. As a lover of satire, I was thrilled to see a comedic film with such dark undertones; I was also excited to see the movie’s A-list cast: Scarlett Johansen, Sam Rockwell, Takia Watiti and Rebel Wilson. I was excited to see how the cast would play around with such dark concepts. Sitting down in the theatre. I was excited to laugh until I cried. However, I cried for different reasons: Jojo Rabbit was unexpectedly the most beautiful drama I have ever seen in a theatre.

Since the beginning, the movie sent the audience on a roller coaster of emotions. Of course the movie is funny throughout but still deals with extremely dark topics like death and the 4th Reich. Watching Jojo’ grow as a character throughout the movie was beautiful to watch. The plot is captivating, the score was unbelievable, the acting astonished me (especially Scarlett Johansen’s role as Jojo’s mother), and the movie’s anti-hate message was memorable and wholesome.