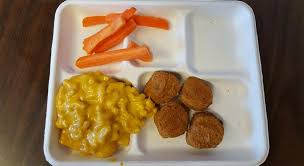 Almost everyone at BHS has eaten at least one tray of school lunch. Many students have eaten school lunch from elementary school all the way through high school. Others prefer to bring their own meals to school. People’s thoughts on Bethpage High School’s lunch vary. Some students feel content with the school’s lunch; others, not so much.

Bethpage High School student Nick Pepe eats school lunch everyday. He specifically “enjoys the cold lunch,” which consists mainly of wraps, salads, and paninis. Many students enjoy cold lunch due to its wide variety, as well as its tendency to keep students full for the rest of the day.

Nick isn’t quite “satisfied with school snacks, like cookies,” which he would like to incorporate into his meals regularly. More often than you think, students bring in their own food, like a sandwich from home, but prefer buying snacks in school.

However, some students hold higher expectations for their school lunch. One BHS student, who remained nameless on the condition that they eat here every day, had a few remarks about the hot lunch. He states “The chicken can be cold and undercooked on occasion.”

The same student received a burnt mac and cheese dish, and is a daily school lunch consumer and thinks the food should be served at a higher standard for students. Another student in the cafe said he would “like more meat on his sandwiches in the deli section.” Perhaps these little things could substantially improve the lunch at Bethpage High School…and perhaps this story could make the difference.

And more improvements are on the way. At Bethpage High School, the cook never changed for many years. Students adapted to a certain type of food, prepared in a certain way. Nick Colasurdo, the new vendor at Bethpage, is looking to make some eye-opening improvements for the school lunch.

The Eagle’s Cry believes the changes Mr. Colasurdo plans to make the school lunch significantly better for students at BHS.