On the Record: Interview with Mrs. Whalen 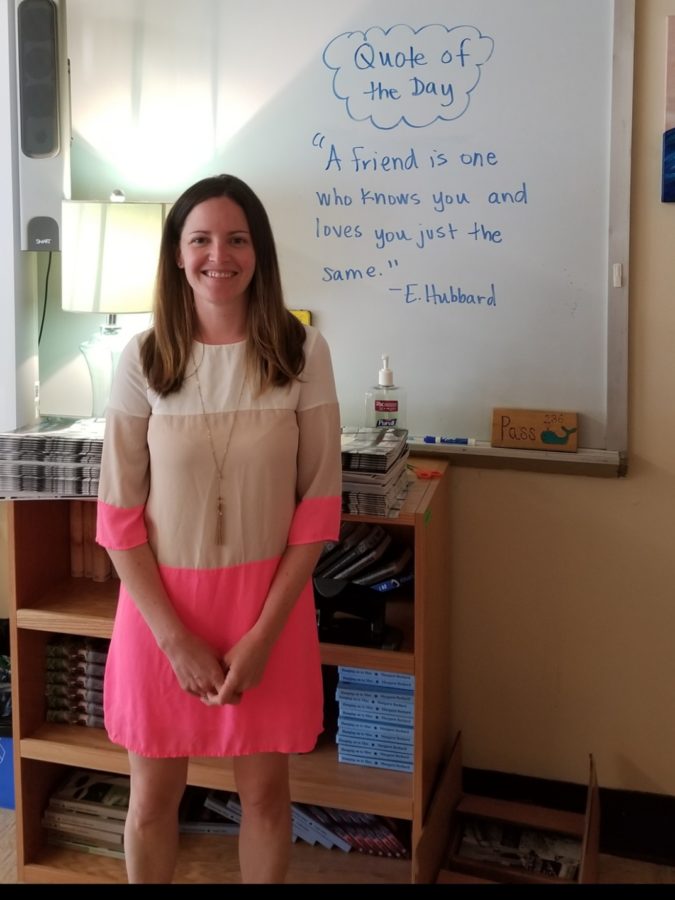 If you were lucky enough to have Mrs. Whalen for an English class or elective, you know what an awesome teacher she is. Chances are high she’s impacted your life in a very positive way, with her calm demeanor and warm smile. We present to you now this Eagle’s Cry exclusive interview to get to know her better.

The Eagle’s Cry: So what are your summer plans this year?

Mrs. Whalen: Let’s see… I have mom camp, where I’m a “camp counselor” for my nine and twelve-year-olds keeping them busy with everything from drawing to bike riding to going to museums, to of course reading. We’ll go to the beach, we’ll hang out with friends, and we’ll go visit  my family in Massachusetts. We usually do some local trips like Sailors Haven, NYC, and Montauk. Also my husband’s turning forty so we’re going to have a fortieth birthday party at some point. I love having two months of alarm-free mornings.

Mrs. Whalen: Well, it’s kind of an embarrassing one I guess. So my husband was a lifeguard at Robert Moses, and I was nine months pregnant with my daughter Jolie. He said “don’t make me come in and have to rescue you from the ocean.” I was very pregnant and the ocean was crazy that day, but it was so hot and I said “I’m going in anyway.” Sure enough, my husband was sitting on the stand with one of his friends and I struggled to get out of the crashing waves.  Embarrassingly, he sent his friend out to rescue me and thankfully he did not blow his whistle to call attention to the entire beachfront. It’s kind of an embarrassing story and probably not my favorite summer memory, but I feel that it’s officially summer when you have to get rescued by a lifeguard, even if you can swim.

The Eagle’s Cry: Pool or beach?

The Eagle’s Cry: What are some productive ways to spend the summer?

Mrs. Whalen: I usually take some classes and teach a class. I read books and try to get something accomplished everyday.  I also try to do something active everyday like riding bikes with my kids, going swimming, or playing frisbee.

The Eagle’s Cry: Where are you from?

Mrs. Whalen: I was born in Pennsylvania, and spent from birth to sixth grade there. I spent from sixth grade to college in Massachusetts, then from college through today, I have lived in New York.

The Eagle’s Cry: Where did you go to college?

The Eagle’s Cry: Did you have any previous jobs at other schools?

Mrs. Whalen: I taught summer school before this, in Glen Cove. It was to eighth graders who had failed eighth grade and it was awful. The whole time I was thinking “this is terrible, what did I do? I should never have become a teacher; this is horrendous.” One girl  refused to even sit down in class. There was a security guard in the hallway, and after I repeatedly asked her to sit down, she said, “if you tell me to sit down again I’m going to stab you after class.” So I went to the security guard, who had been stationed outside the door, and asked if he could come into the room for the rest of the summer. They searched the girl, and sure enough she had a knife on her. So for the remainder of the summer the security guard walked me to my car everyday.  Sadly, it was the worst summer ever, and I had gone into it so hopeful that my first experience with teaching was going to be so great. At the end of it, I was thinking I should never have become a teacher, what did I do? Then I came to teach in Bethpage that September and the first day of school my first period class walked in, and I instantly knew it was going to be different. That’s the only other place I taught English. In college I waitressed, I babysat, and I worked at a construction company for a while. I had lots of random summer jobs as a teenager.

Mrs. Whalen: This year, my New Year’s resolution was to read fifty-two books this year, one a week, so I can say my favorite book for this year so far. I just read the Tattooist of Auschwitz, which was so good. It was based on a true story of this couple that met in a concentration camp during World War II and shockingly survived and found each other years later. That’s probably my favorite one right now.

The Eagle’s Cry: Do you think the book is always better than the movie?

Mrs. Whalen: Of course.  I love the bumper sticker that says “read the book, it’s better.”

The Eagle’s Cry: What’s your favorite band/genre of music?

The Eagle’s Cry: What are your favorite hobbies?

Mrs. Whalen: I like making things like my husband and I made our dining room table and have continued to renovate our home room by room.  We’re currently scraping all the paint off of the house which is tedious, but rewarding. I like my girls to see that woman can use power tools too.  I obviously read books, and I also coach one of my daughter’s softball teams.

The Eagle’s Cry: What would you consider your greatest professional achievement?

Mrs. Whalen: There’s this quote that I like which says “I like a teacher who gives you something to take home to think about besides homework.” I feel that’s what I shoot to do, that when students leave they feel they’ve learned something besides how to read and write. I guess in the beginning of my teaching career, I felt that the more work we did and the more homework I assigned, the more my students were learning and therefore, the more effective I was as a teacher.  Now I shoot to teach reading and writing, but also life lessons that have my students thinking about something besides homework.

The Eagle’s Cry: What would you consider your favorite class to teach?

Mrs. Whalen: I guess I really like AP Language, but I feel that I like something about every class that I teach. I like 9th grade because they’re at the beginning of high school, and I like helping them through the transition from middle school. I like 11th grade because I feel that I can help juniors learn how to manage a very stressful year and guide them in their future career choices.   But I also like Teen Lit and Creative Writing because they’re more creative and allow students to express themselves.

The Eagle’s Cry: If you could meet and talk to one writer, dead or alive, who would it be and why?

Mrs. Whalen: The book that I’ve taught in high school that I feel was the most impactful was probably Night, so maybe Elie Wiesel. I used to have my 10th graders, when he was still alive, write letters to him, and he actually wrote back, which I felt was pretty amazing. He didn’t write back to every single student, but to the whole class, and I felt that the fact that he took the time to write back to all of us was so inspiring.

The Eagle’s Cry: What advice would you give to the graduating class?

Mrs. Whalen: A lot of people feel that they need to know what they want to do with their lives before they leave high school, and it feels kind of crazy to me to know with certainty what you would like to major in when you have so much yet to experience intellectually and socially.  Not that there aren’t classes here that aren’t like real life, but you have yet to really experience the academic challenges and freedoms that come with college. I went to college as a math major and now I’m teaching English, so don’t give yourself so much pressure of “I have to decide what I want to do with my life.” A lot of people feel that they have to have it figured out when that’s the point of college.