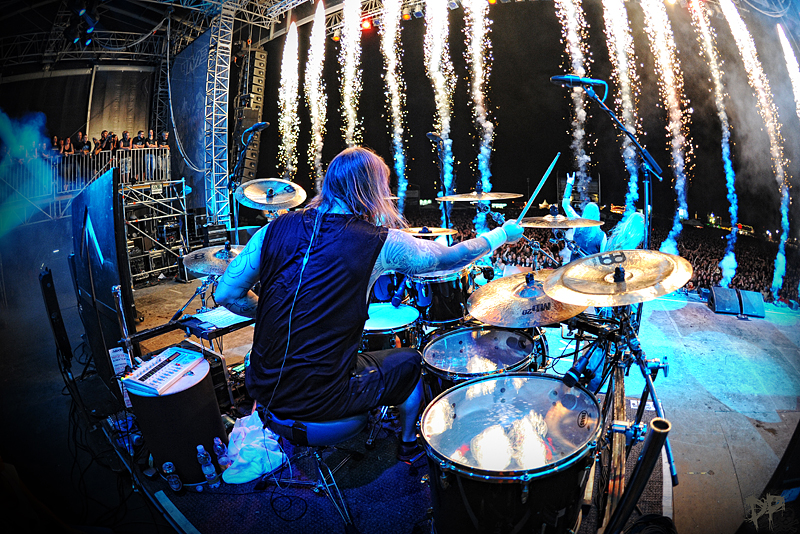 Ask anyone to think of a few famous drummers, and you’ll hear names such as “John Bonham,” “Neil Peart,” and “Phil Collins” pretty often. While these are amazing drummers in their own rights, the skills of death and speed metal drummers are often overlooked, as they push the limits of speed and technicality, both sacraments of metal, while maintaining groove. Names such as Trey Williams, Inferno, and George Kollias may not be household names, but their skills should not be overlooked when discussing extremely talented drummers. Here’s a list (in no particular order) of some extreme drummers and their bios, careers, and achievements.
Please note, some band names are abbreviated to keep the attention on the drummer, not the name of his band. Also, click on a drummer’s name to watch a video of his work! There are many videos hidden throughout this article.

Jon “The Charn” Rice— Hailing from Pittsburgh, PA, Jon Rice has taken the metal world by storm with his work, building an impressive résumé at only 31 years old. He’s played throughout all of the metal genres, working for years in Job for a Cowboy and rock band Scorpion Child. He filled in for Inferno during Behemoth’s North American Tour with Slayer. He’s filled in for seven others bands across metal, and continues professional studio work today.

Trey Williams— Besides being an insane drummer for a world renowned death metal band, Trey Williams has a personal motivation for his commitment for his band. He said, “the world is more [expletive deleted] than any tale of fiction, and we want compelling subjects and content with brutally honest lyrics.”
In an interview with Metal Temple, Williams explained how his insane drumming skills came to be. “I just took practice man; you’ve got to practice a lot… you know before [my band], I wasn’t as curious as I am now in drumming, and once I got in this band, it was big, it was just intimidating to be honest and I just had to learn how to keep up with all the other amazing guys out there….. I am humbled, everyday I get to go out on tour and watch other drummers. I watch them, and it doesn’t matter the genre, I watch other drummers play and I just say ‘I wish I could play like that,’ so it is cool to me that I get to be compared to other people, but by no means does it get to my head, and if someone says I am the greatest, absolutely not, one of the greatest things about music is that you can play it your whole life and you’ll never master it, there’s always going to be something new to learn and there’s someone that is better than you.”

Tomas Haake— You can’t have a list of metal drummers without the drummer of one of the most recognizable tracks in modern metal. The drumming pattern on Meshuggah’s song “Bleed” was so complex for Haake to play that he changed his entire style of drumming, leaning back more in his seat to give his kicks less power and more speed. The intense technicality of the song makes it a fan favorite, with Meshuggah playing it at every concert without fail. It allegedly took close to six months for Tomas to learn. The beast of a drummer doesn’t always write his own drum parts—whoever writes the songs programs the complicated drum parts on computers, which Tomas flawlessly emulates on the kit.

Fredrik Andersson— One of the tightest, most influential drummers of the past 20 years, Fredrik Andersson joined Amon Amarth in 1998, playing with them for 17 years until his separation with the group in 2015. In that time, he recorded 8 studio albums with them, along with various singles and an EP. As a versatile musician he is currently involved in three other bands, where he has recorded drums and keyboards, written lyrics, and written songs throughout six studio albums, three EPs, one demo, and a live album. In one past project’s demo he played bass, guitar, drums, and wrote lyrics; in other projects, he has served as the producer and engineer.

George Kollias— The master of double bass began by teaching himself drums at the age of 12 in his homeland of Greece. He’s the drummer/percussionist for death metal band Nile, and has written/sang for his own projects and other bands. He has released two drumming DVD lessons, called “Intense Metal Drumming” and “Intense Metal Drumming II.” Kollias has also released a book on drumming. He’s geared up and ready for another tour around the US with Nile, and is working on the new album. He has his own line of custom double bass pedals, and his technique is a unique combination of ankle motion and swiveling.

Inferno— Zbigniew Robert Promiński, also known as Inferno, is the drummer for Behemoth. He has taken several breaks from the band to focus on his family life, in which he is the father of two. His endorsement list spans from Czarcie Kopyto pedals to Pearl drums to Paiste cymbals and Pro-Mark drumsticks. In 2008, Spaun Drum Company released the signature Inferno snare drum, an 18-ply, 8 by 14 inch champion of snare drums. Inferno’s top inspirations for drumming are John Bonham, Neil Peart, and Krzysztof “Docent” Raczkowski.

Bonus awesome drummer:
Joey Jordison— Joey Jordison achieved fame through his catchy, melodic, yet brutal drumming in Slipknot, where he was complimented with the percussive likes of Shawn “Clown” Crahan and Chris Fehn. However, he was controversially ousted from the band in 2013, and joined the supergroup Sinsaenum. With them he has recorded three EPs and two studio albums. Jordison played live with Metallica in 2004, filling in for drummer Lars Ulrich, who fell sick suddenly before the performance. At only 5’3” Joey is a small ball of pure power in the studio and live.