Back in 1985 in New Jersey: The Wedding Singer 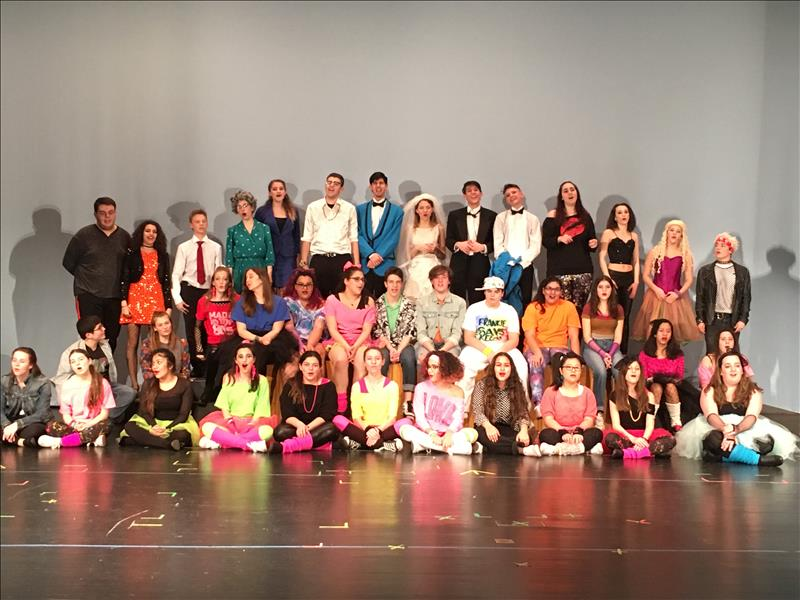 Directed and choreographed by Ms. Strongin and managed and produced by Ms. Kovacs, the Bethpage Masquers Guild’s The Wedding Singer, The Musical Comedy was one of the most enjoyed shows ever put on. Students, teachers, friends, and family filled the seats at the Bethpage High School Center for the Performing Arts to cheer on the extremely talented cast.

Lead roles Robbie Hart and Julia Sullivan, played by juniors Will Katartzis and Victoria Nardulli, quickly grabbed the attention of the audience with their perfect voices and their impressive stage presence. Isabella Ingenito, who starred in the show as Holly, expressed her adoration for the cast or her ‘second family’ as “so motivating” and that since “[they] all got along, it made the show even more fun to perform.”

One of the most appreciated parts of the show was, hands down, the music. Below the stage was the Pit Orchestra conducted by Dr. Petruzzi, with live music including students and faculty on guitar, keyboard, cello, violin, and many more instruments. During the show, catchy and hard-not-to-groove-to songs filled the ears of the audience and received loud applauses. Some of the songs include It’s Your Wedding Day, Somebody Kill me, Casualty of Love, All About the Green, Right in Front of Your Eyes, Single, Move That Thang, and Grow Old With You, all that are part of the movie starring the hilarious Adam Sandler. A Bethpage alumni who attended the musical Saturday night exclaimed “it was one of the best high school shows, and the cast was extremely talented.”

Overall, a huge congratulations to the entire cast of The Wedding Singer, and we can’t wait for what is in store for next year. We wish the best of luck to the seniors with their future endeavors and success: Marco Cunha, Sabrina Johnson, Saverio Potente, Jason Maund, Samira Benkhallouk, Christine Corsaro, Lauren Reams, and Julia Fikar.