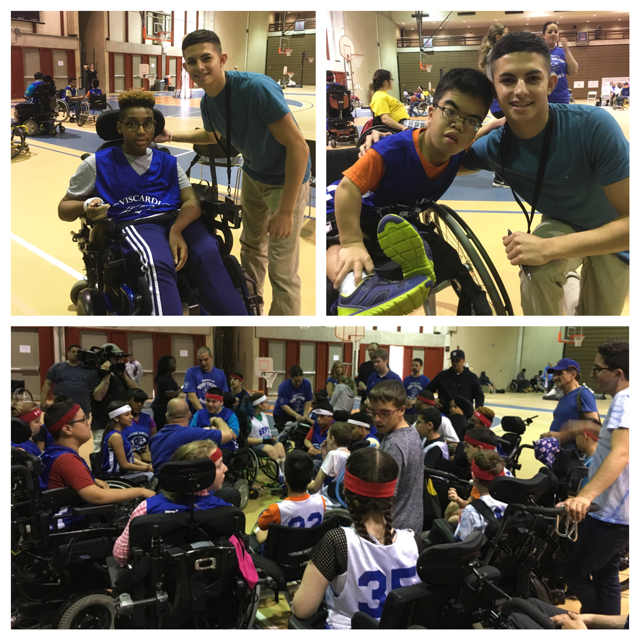 The fourth event of Day 1 of the 2016 Nassau County Empire State Games for the Physically Challenged is about to begin as dozens of disabled young men and women get ready to take the wheelchair basketball competition by storm. The smiles on the competitor’s faces are contagious; they’re thrilled to once again show off their prodigious skills to everyone in attendance. 32 years after the first competition, the excitement and appreciation for the athletes is still alive.

The wheelchair basketball event includes participants from all over New York state aged eleven through eighteen. Competitors’ disabilities include—but are not restricted to—cerebral palsy, spina bifida, muscular dystrophy, dwarfism, and spinal muscular atrophy. Because some disabilities are more severe than others, different sized hoops are scattered across the baseline of the court, including 2-foot, 4-foot, and 8-foot nets.

Four teams competed in the 32nd annual event including the Viscardi Varsity team, which took home gold, the Westchester School for Special Children, which won silver, the Viscardi JV, which grabbed bronze, and the 4th-place-ribbon-winning UCP Westchester. Although there were trophies handed out, every competitor was a winner.

Joe Slaninka—head coach of both Viscardi’s JV and Varsity teams—is a Nassau County Empire State Games for the Physically Challenged veteran. Slaninka began his wheelchair basketball career in 1985 as an 8th grader, and played all throughout high school.

“I love the Empire Games,” Slaninka said. “It means a lot for someone with a disability to have fun and compete.”

In 1993, he began working at the Viscardi center—an organization that prepares people with disabilities for the workforce through job training and employment placement services. Slaninka has since became committee head for the wheelchair basketball event and head coach of the teams.

“A lot of people think kids with disabilities can’t do things,” Slaninka claims. “The Empire Games proves those people wrong.”

The event is loads of fun. Loud cheers after each basketball raid the gym, along with a series of claps. Volunteers hand out refreshments to the athletes subbing in and out of the games. A referee settles a few physical tie-ups; the desire to get the ball and score is palpable.

“It was a little tough the first year,” said Omari. “It’s a really cool experience, though. It’s fun being part of a team.”

Delroy Stennett—father of Omari—spoke about what it’s like having a son with a disability.

“Being he’s in a wheelchair, it’s beautiful for Omari to compete in the Empire Games,” he said. “He gets to display his ability for people to see. The Empire Games are very special.”

At the Empire Games’ wheelchair event, I also sat down Douglas and Elsie Resnick, parents of Keanu Resnick. Keanu—a fourth-year competitor and member of Vicardi Varsity—lives with dwarfism and legal blindness. An extremely outgoing young man, Keanu wasn’t afraid to say hello and wrap his arm around me to take a photo after I had just met him.

Elsie Resnick calls the Empire Games “great and terrific for [his] moral and spirit.” “People think kids with disabilities are different. They’re not,” she said. “Deep down, they’re a regular, average child who has just as fun as any other kid.” Douglas Resnick proudly emphasized, “a lot of people are afraid to look at kids with disabilities, but they shouldn’t be.” “They want to be watched; they want people to see what they can overcome.”

The 2016 Nassau County Empire State Games for the Physically Challenged is more than just the trophies and score at the end a game, it’s about a group of hardworking young men and women playing their hearts out and having fun in front of an extremely delighted crowd. The Empire Game—once again—had another successful year.