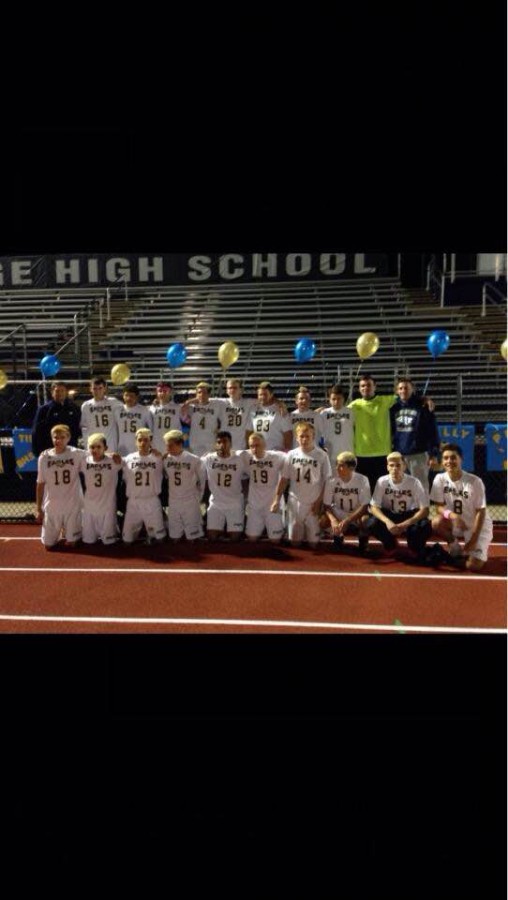 The team’s starting eleven for the playoff game, which had been the lineup for most of the season,  was a mix of juniors and seniors. Coach Franzke used a 4-4-2 formation, with Cormac Foley and Jose Garces at the striker position; Ryan Mendes, Nick Maggi, Carlos Bastidas and Frank Iacovano in the midfield; and Ryan Mercer, Joe Pistone, Joe Tierney, and Vishnu Nair rounding out the defense. Jake Vera was in goal.

A playoff game works like this: two regulation halves span forty minutes each, and if the game remains tied at the end of regulation, the teams play two fifteen-minute halves of “golden goal,” meaning that the first goal scored wins the game. If the game still remains tied, penalty kicks ensue, and the team with more penalty goals wins the game.

Last season, the boys made it to the second round, falling 2-0 to Great Neck South. This year, the Eagles’ first game of the playoff schedule was against Mineola (5-4-2) at Mineola High School.

“It was a win-or-go-home mentality, and no one wanted to go home. We all wanted to have practice tomorrow”, said BHS senior Joe Tierney.

The game started off slowly, both teams fighting for possession and control of the half. Halfway through the first half, Mineola scored a goal off a cross and took a 1-0 lead. Bethpage would only give up one goal in the rest of regulation time.

The second half was very different than the first, as Bethpage kept possession for more than 75% of the half. With twenty minutes remaining, Bethpage scored the equalizer from Carlos Bastidas off a through ball down the right side of the field, which he planted in the back of the net. With the game tied at 1-1, Bethpage had plenty more opportunities to score another goal, but the second half came to a close and overtime loomed.

Entering overtime, Bethpage would start with possession of the ball and look to score the golden goal to end the game. After a few crosses that did not find the back of the net, Mineola countered, sending all their forwards and most of their midfield to the goal. Mineola scored on a through ball that barely squeezed past the Bethpage defenders, sealing a victory for them and an end to Bethpage’s season.

“Out of all my years of coaching, this team has the most skill and talent on the ball I’ve ever seen,” Coach Franzke expressed to the team at the end of the game.

For the seniors, this would be the last post-game talk from the coaching staff. Although there was a feeling of defeat spreading around the team, there was also a great feeling of satisfaction as well.